About a month ago, a Birchbox craze happened. Complete craze.

Pretty cool concept - you pay $10/month and you get 4-6 samples based on you "beauty profile." I absolutely hate getting a new product and then being allergic to it or just not liking it...after spending $20 on it - do you really want to just throw it out. NO! (At least I don't!)

It was very fun getting mail and it not being a bill! I have to admit that. ;)

I was kind of excited that it was in a box that was nice, simple (yay I can recycle the box...it's cardboard!) and the items were wrapped in some tissue paper!

It came with this piece of paper that included what was in the box as well: 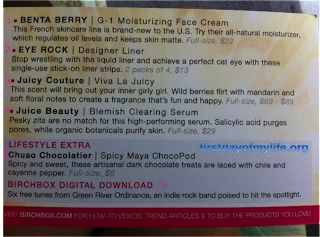 I really liked that it included the prices of a full-size! Very cool.

Now as far as the products go... 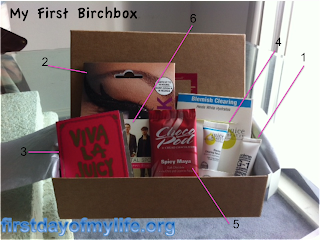 Benta Berry, Moisturizing Face Cream.
I was excited to get this because I am in the market for a new face cream. The last one I tried (Yes to Carrots!) was no good. Caused me to break out and didn't keep my face moisturized.) But, as far as this face cream goes - I do like it. It does seem to moisturize my face which is the whole point!

Eye Rock, Designer Eye Liner.
I am not a party girl. I am not a "hip chick." I will never wear this. MAYBE I will try it out for fun just to see what it will look like on me. But I'd imagine it looking pretty foolish on me. I could have done without this.

Juicy Couture Perfume.
Who doesn't like perfume? I do like perfume - love trying new ones. But then when I look to see how much a bottle costs - almost $100...I don't think I'd ever buy a whole bottle of it. I'm not in the $50-$75 range for perfume. I won't completely say this one is no good...I'm iffy. (Ok, so I just sprayed it and I do like the smell...a whole lot. So does V. So now - the question is will I cave and buy a whole bottle?? Ahh...)

Juice Beauty, Blemish Cream.
Ok, so this is an organic product. Pretty cool in my book! $30 for a full bottle is pretty pricey but when you consider the fact that it is organic - can't really complain too much. I'm okay about this product.

Chuao Choclatier, Spicy Maya ChocoPod.
YUM. Chocolate. YAY. It is super delicious - it has a nice spicy "kick" to it...dare I say, it almost tastes healhy because of that and the fact that it's dark chocolate. But, again, $6 for full-size version. I rather enjoyed the chocolate...but not a $6/piece? don't know. I'd rather spend my funds elsewhere. So as far as the product sample goes, two thumbs up - if I'd buy the full-size, no...iffy sample.

Digital Download of Green River Ordinance.
I guess this is cool? It feels like I'm at Starbucks though with the free music sample. I could have done without this...I selected that I was an "active" life style so why not give me some workout music instead of indie music? Thumbs down.

So, it looks like I have: two thumbs up, two thumbs down, and two "iffies." I guess at least it's all even? I will resubscribe next month to get a real "feel" for it.

I mean, lets face it...these product samples are most likely given to Birchbox for free in order to get advertisement for their company. Kudos to Birchbox for the ingenius business idea!