It wasn't until I talked to V last Thursday that I learned what a TED SHOW was. (And boy was he excited to tell me!)

Believe it or not, he found out about the Ted Shows on Stumble Upon. (If you haven't used Stumble, I highly suggested you give it a go!)

Basically, the Ted Show is a lecture full of people who have either invented something, made a discovery, etc. The lecture can be about anything.

A girl I went to high school with had a few extra tickets to the TEDxUF Show. (An independent Ted Show at the University of Florida. they have these independent shows all over, all of the time.) Thanks to social media and her announcing the extra tickets, V grabbed us a couple. (Road trip!)

I guess these independent shows are a little different than a "normal" Ted Show. The speakers had some relation to the University of Florida - either an alumni, current student, or professor. 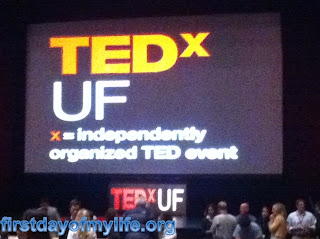 They said that there were 11,000 people at this show...it was sold-out. It didn't seem like 11,000 people...but what do I know? It was advertised as the largest Ted Show Conference on the east coast.

I had never been to UF so that made it that much more exciting for me. V was super excited to be going...he has been watching Ted Show segments online for sure. 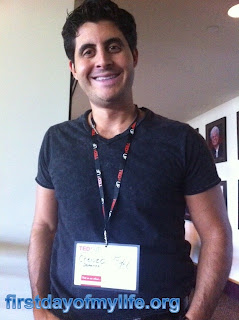 I haven't been in a classroom/lecture setting in so long, so believe it or not, I was kind of psyched!

I won't go into detail about every single lecture - how absolutely boring would that be? Ha-ha! But I'll share with you what they were all titled - Speaker Lineup was at follows - 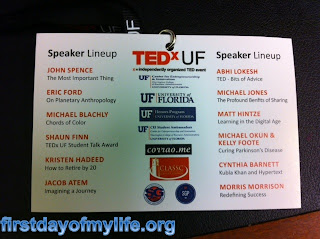 The particular theme of this conference was curiosity...ways these speakers benefited from being curious in their lifetime & how they grew as a person by being curious.

Here are some highlights...

John Spence was great. Short, sweet, witty, to the point, and very honest. He seems to be an "Awesomely Simple" guy. (He has a book named that...see, I can be witty, too!) In the words of this pretty awesome guy - it isn't about the stuff you have when you die, but how much you loved someone & how much they love you.

Kristen Hadeed was in the gifted program with me from elementary school to high school - she was a year below me. She really used visuals to it's fullest - including some photos when she was a little girl and notes she made as a child. She was one of the most energetic & lovely folks in the group!

If you have an opportunity to attend a Ted Show - even one of the independent ones - take it! Soaking up any knowledge you can is so important. Although some of the talks might not interest you - their passion just might reignite your passion for learning, your passion for whatever it is that you might have given up on because "it's too hard." Anything working doing is hard.